North American Lighting has reduced its total compressed air energy use by 27 percent – and in the process – saves over 1,100,000 kWh/year for a total annual savings of $91,000. The project payback was less than a year. Also noteworthy is that the savings will increase as the costs of energy increase, a point often overlooked.

Many maintenance managers know a combination of sizes and types of air compressors is a good thing for efficiency of a compressed air system. This allows a facility to match demand to a correctly sized compressor. The challenge has traditionally been sequencing the compressors to run optimally. Most controllers on the market can only sequence the order in which air compressors run without selecting the best combination for current demand.

Following a week of data logging the North American Lighting system, a baseline was established and the system was analyzed. It was discovered the customer was running too many air compressors at the same time and their large VSDs were running fully loaded rather than trimming.  Airleader simulation software uses that data to demonstrate how a master controller could reduces the unloaded energy.

The Airleader Master II Controller could:

How healthy is your air system? Are there opportunities to reduce the amount your facility spends on compressed air and maximize the operation of your system?

You can download and read the full article in Compressed Air Best Practices, at the following link: 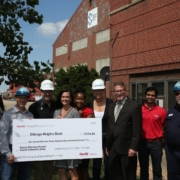 Airleader performed a complimentary leak study and leak repair. The service provider knew there were much greater energy savings to harvest through system improvements and persuaded a reluctant management to install a Master Controller to continuously monitor the system during operating hours and down time. By monitoring and analyzing key performance indicators with the Master Controller, improvements to increase the efficiency of the system were identified then verified. The project resulted in an overall decrease of 2,582,979 kWh annually or $215,037 at current rates. Additionally, the mill received a utility rebate in the amount of $177,714 which resulted in a simple Return on Investment of 0.2 years. 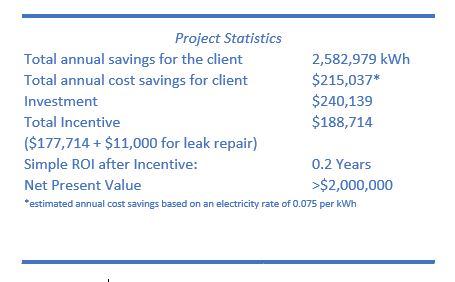 Many industrial customers are frustrated with the high costs of their compressed air systems. Airleader was the third service provider contacted and performed a leak study and leak repair. The previous attempts were incomplete. Airleader provided a complimentary leak test and repair for the customer. After the complimentary leak repair the customer was not motivated to move forward with further measures doubting the savings would be worth the investment.

Airleader, on the other hand, knew there were much greater energy savings to harvest through system improvements and persuaded the customer to install a Master Controller to continuously monitor the system during operating hours and down time.

The existing air system consisted of two compressor rooms which were not connected. There were three compressors in each room and two different system pressures. There were two desiccant dryers. The system was being manually controlled with 5 out of 6 compressors running in modulation. 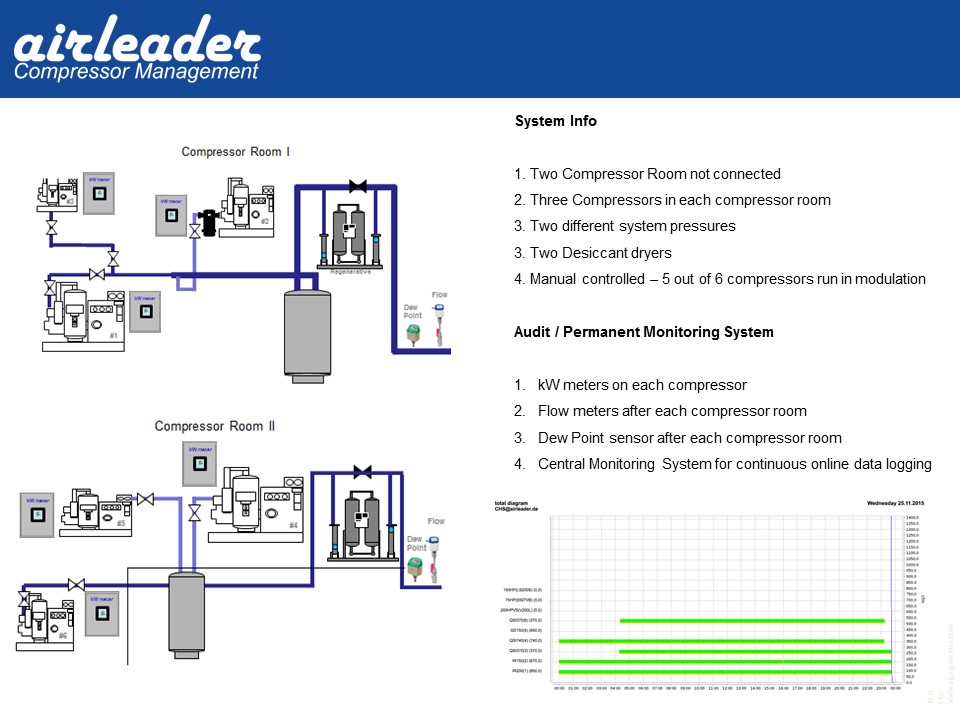 Data was collected on the system from December 2015 – February 2016 (1) to provide a baseline and a snap shot of the system. During February leaks were repaired. The first month of leak repair savings were harvested by the company in March (2). Airleader connected temporarily to one compressor room to verify saving potential (3). The next step was to replace the desiccant dryers with cycling dryers. (4) resulting in further savings.

The last week in December, the Airleader Master Controller was connected to the system. Maintenance was given access to online monitoring. A 4” pipe connecting the two compressor rooms was opened. Dramatic energy savings were achieved through system improvements (5). Because of the significant savings, the customer was able to invest new compressors to replace the compressors which were older than 20 years and not as reliable. A 200HP and 75HP VSD were installed as well as a 150HP fixed drive. Performance suffers based on 5-7% premium energy demand of the VSDs. 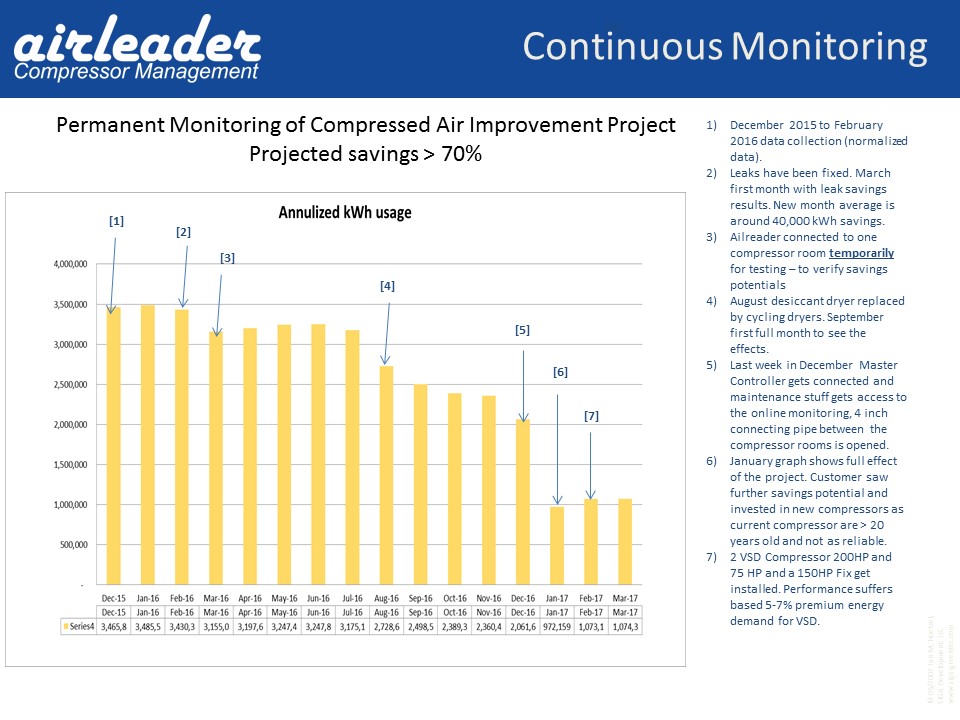 This project resulted in an overall decrease of 2,582,979 kWh or $215,037 which the customer will harvest annually. The total project costs for installing permanent monitoring and Master Controller, upgrades to system piping, storage and compressors were $240,139. The company received a $177,714 utility incentive. The project had a simple ROI of 0.2 year after utility incentives.

The key takeaway of this project is that the opportunities for improvements would not have been discovered without permanent monitoring in place. The case study demonstrates permanent monitoring of the compressed air system is a best practice resulting in annual savings. It provides key system data which is useful for system troubleshooting and discovering additional system efficiency which may be gained.

“YOU CANNOT MANAGE WHAT YOU DO NOT MEASURE”